Do you have a backup? 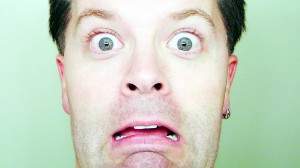 Do you have a backup?

Those four very scary words that are usually only uttered when you have identified a real need for a backup.  The reason I’m writing this is yes, it happened to me, for the first time in what is a very long IT career, I experienced a complete hard disk failure!

I was sitting in front of my beautiful iMac and it did something it’s never done before in the four years that I’ve owned it. It hung. Okay Windows users I know you won’t believe me, but trust me, it’s true. This machine has never stuttered, stammered, delayed, or failed in any way but there, before my eyes, was a frozen screen and then incredibly a reboot! I can’t say I immediately panicked because I was too shocked. Crashes and hangings were things that used to happen when I used Windows this OS X thing just keeps on going. I wasn’t surprised to find the system had rebooted successfully, I was a bit concerned to have heard a strange ticking or clicking sound, I actually thought that something was tapping against the back of my computer – but more investigation and a couple of calls to – wait for it, I almost can’t believe this myself, a group of very helpful people in Apple support in Cork – (you’ve got to love the accent) but genuinely they really were absolutely on the ball and 100% helpful and constructive.  (I know – helpful IT support people – it’s almost unheard of!) they quickly diagnosed a failing hard disk,  then came the question.

Thanks to Apple’s Time Machine. (You just plug it in and it automatically takes a backup every hour, on the hour, with daily backups saved over the last several months.) #You’ve got to love Apple.

As the story unfolds, you, dear reader,  are expecting a pitfall any moment. How quickly could I get it repaired? What would the cost be of the repair be? There’s going to be a kick in the teeth somewhere – there usually is. Okay – first minor hitch, it’s difficult to get an appointment at the local Apple Store, I persisted, in the end choosing to turn up at opening time Monday morning at 10 AM. It was quiet, I was seen at 1030,  hard disk failure quickly diagnosed costs? Replacement part for a four year old iMac bought in the Apple Store. Knowing their penchant customer service I pressed, saying I was disappointed to have experienced this failure,  the helpful (again ) guy at the counter said he’d see what he could do.

They waved to the charge for the replacement hardware, charged me just £24 for labour. The machine was ready later that same day.

Only one hurdle to go, would the Time Machine restore work. Quick answer YES, was it a quick restore no – that  took overnight but, the following morning I was back up and running, emails, software,  applications everything. Unbelievable!

Final thought, the ONLY application that gave any hassle was, you guessed it, Microsoft Office – “please re-enter your product key” – thankfully I’d saved the original packaging and was not even thwarted by the Microsoft goblins.

One final thought, my successful reboot was made so much easier because, much of my work is done in the cloud. Project documents are saved in Collabor8online (obviously) our Accounts,  software development schedules, outstanding tasks and CRM data are also cloud-based. (Watch out for Collabor8’s own CRM system K8Online –  coming soon!)

Collabor8online offers a useful backup for all of your project data, that includes the data that is not just on your machine but on your colleagues, team members and contacts too.  So we can even help you when Apple’s Time Machine can’t!